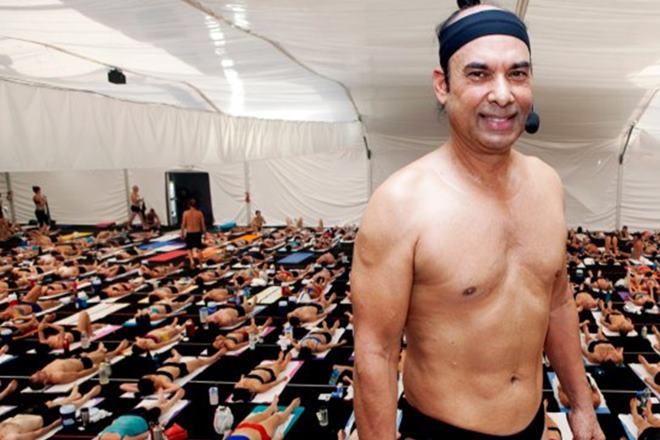 Bikram Choudhury was born in the city of Calcutta (now Kolkata), in the year 1946. At the tender age of only four years old, Bikram began yoga training under the strict guidance of Bishnu Ghosh, one of the most popular physical culturists of that time, at his ‘College of Physical Education’. Bishnu is the younger brother of Paramahansa Yogananda (Author of ‘The Autobiography of a Yogi’ and founder of the Self-Realization Fellowship in Los Angeles).

Bikram was extremely dedicated, devoting four to six hours every day towards it. When he was only thirteen years old, he won the National India Yoga Championship and kept claiming the title for the next three years also. Thereafter he retired as the undisputed ‘All-India National Yoga Champion’. At the age of seventeen years, Bikram Choudhury got badly injured in the knee during a weight-lifting accident. Renowned doctors, from as far as Europe, gave up the chances of his ever walking again.

However, having faith in his teacher, Bishnu Ghosh, and his yoga techniques, Bikram went back to his school. Six months later, he experienced total recovery in his knee. Thereafter, Bishnu asked Bikram Choudhary to start a number of Yoga schools in India. Bikram received fantastic response from people and his yoga schools became extremely successful. Then, again at Bishnu’s insistence, Bikram traveled to Japan and opened two yoga schools. Since that time, he has being promoting the curative techniques of Yoga therapy around the world.